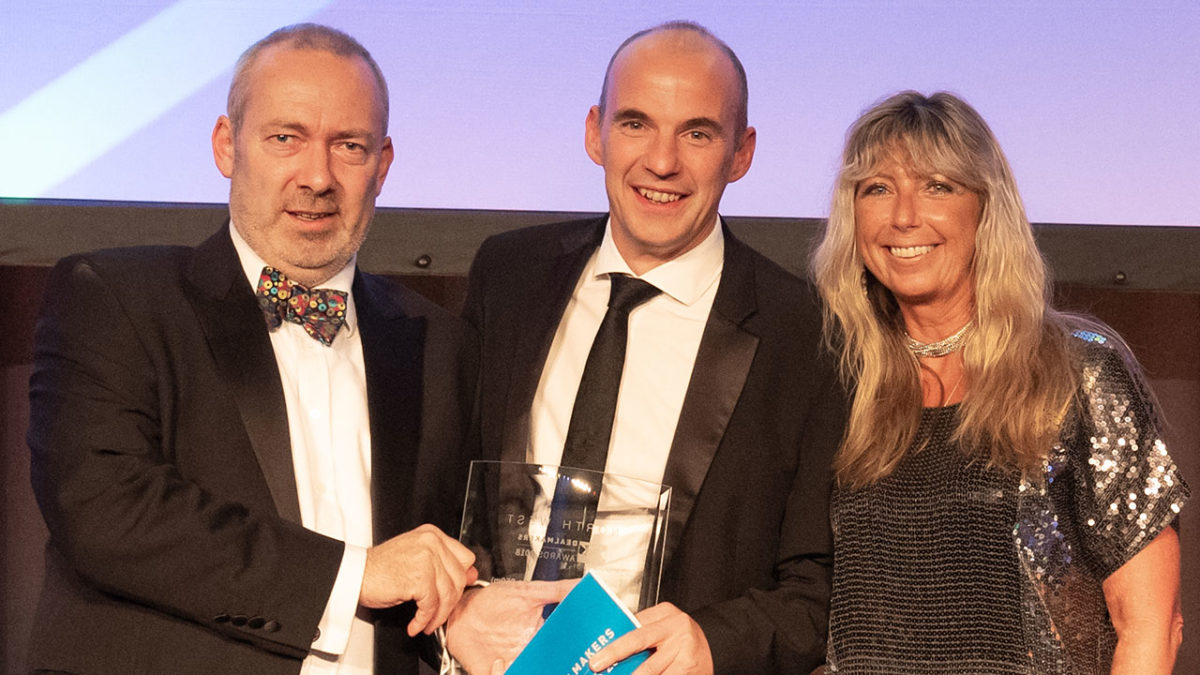 See further information below of this award and the other winners: Deal of the Year (£10m to £50m)

Following on from presenting the award Paul Waite, Director at Rowan, said “It was a great night. A room filled with impressive deal-makers and worthy winners. The host Matt Dawson was very entertaining and did a fantastic job of leading the awards.” Other winners were:

Corporate Finance Advisory Team of the Year Winner: Rothschild & Co
There were some exceptionally good entries and some superb deals, but judges said Rothschild had had a truly standout year. Highly commended: GCA Altium
Shortlisted:

Mid-Market Team of the Year Winner: Grant Thornton UK LLP
Grant Thornton has been prolific in all ends of the deals market but the judges felt they really stood out in the mid-market.
Shortlisted:

Private Equity/Venture Capital Team of the Year Winner: Equistone
What swayed the judges were two of the deals that Equistone were involved in – Travel Counsellors and Concept Life Sciences.
Highly commended: BGF
Shortlisted:

Transaction Services Team of the Year Winner: PwC
The judges said that all the Big Four provided similar transaction services but felt PwC were ahead of the pack.
Shortlisted:

Deal of the Year (£50m plus) Winner: Sale of Concept Life Sciences (Equistone, Rothschild & Co, Addleshaw Goddard)
The judges remarked that this deal saw Equistone ‘win on the way in and win on the way out’ as they sold Concept Life Sciences to the London Stock Exchange-listed company Spectris.
Highly commended: The Delivery Group’s sale of P2P Mailing to FedEx (Hill Dickinson, PwC, Baker McKenzie, BDO, Stephens Scown)
Shortlisted:

International Deal of the Year Winner: Sale of Crawford Healthcare to Acelity (KPMG, DLA Piper, RBC Capital Markets, PwC, Cooley)
The judges remarked how this saw a sale for far more than for what the business was bought. It was a US buyer in a highly regulated market. It was a high-tech deal and one that saw the company go from distressed to £100m.
Shortlisted:

Flotation of the Year Winner: Floating of Immotion Group on AIM (WH Ireland, Shard Capital)
The judges said it was an impressive raise for an early stage tech company.
Shortlisted:

Asset Based Lending Deal of the Year Winner: Funding facility for N Brown Group (Rothschild & Co, Deloitte, KPMG, HSBC, RBS/NatWest Markets, Eversheds Sutherland)
The judges pointed out that it was N Brown itself which nominated this deal, not advisers, testament to a deal that has enabled an innovative retail structure.
Shortlisted:

Outstanding Contribution Award Winner: Amin Amiri, a2e Industries Limited
Amin was a top dealmaker in the 1990s and head of Grant Thornton’s corporate finance until 2000. Since founding a2e in 2001 he has acquired controlling stakes in 28 mid-market companies. He is a visionary, role model and leading light in the North West deals market.

Young Dealmaker of the Year Winner: Charlie Morris, KPMG
Charlie was picked out in a very difficult category to decide with all three young dealmakers impressing the judges.
Shortlisted:

Dealmaker of the Year Winner: Phil Adams, GCA Altium
The judges said Phil played a lead role in the merger of Altium and GCA and since then has led the business to greater and greater success, culminating in the current year with spectacular deals such as the flotation of Team 17.
Shortlisted: